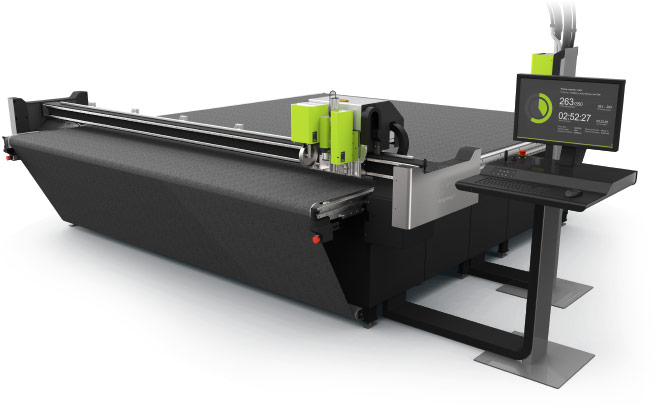 ”Esko showcased new, innovative software tools that will help sign shops get the most productivity out of their finishing systems.”

“The i-cut Production Console (iPC) drives all Kongsberg table functionality, such as camera control, machine set up, tool recognition, calibration and tool adjustments. On display at ISA were new features Esko recently announced to the front-end operating system. With these features, precise production planning and prioritising in the digital finishing operation becomes easier to manage.”

“With the integration of a complete materials database, Esko has bundled decades of digital finishing expertise. The operator gets expert advice from the system on the selection and setup of tools and knives when setting up the job. Using this information takes guesswork out of the finishing production, speeding up the changeover between jobs and the entire production and improves consistency. The risk of damaging expensive materials and quality variations is drastically reduced.”

“Esko has also integrated its Kongsberg tables with its workflow automation software, Automation Engine. Automation Engine’s Device Manager gives better control over finishing production. Work in progress and the status and queues of all connected devices are clearly visualised on screen. The software determines optimal sheet nesting to increase production capacity. Operators use an intuitive drag-and-drop interface to prioritise table queues, insert rush jobs and even balance workloads between tables.”

“Esko knows from its customers that margins on short run digital print work are tightening. When a job is estimated and quoted, it is important to know how long the job will take to produce. With accurate job estimation, companies are able to communicate better quotes and forecast more accurate delivery times to their customers, ultimately protecting overall profitability. The new Kongsberg Estimating Software module delivers against these challenges. Packaging, signage and display designs are prepared, and production estimates are generated automatically, based on production metadata such as substrate type and thickness.”

“Also on display at ISA was Esko’s i-cut Suite, a collection of prepress and pre-production software solutions providing the tasks sign and display companies need, such as preflighting, file editing, cutting paths and nesting. It helps companies eliminate errors, save time and reduce waste.”

Speak to Graphix Supply World to find out more about the Esko product range.